The Not-So-Glamorous Side of Cannes 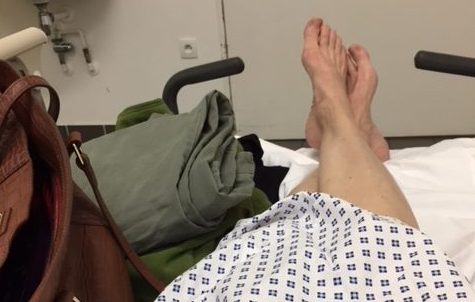 Hello Writers! My apologies for not sending out my blog for the past couple of weeks, but you’ll soon find out why.

As most of you know, I spent the past two months in Cannes, working at a brand new Storytelling Institute and helping eight writers complete their screenplays. The workshop was amazing and magical and intense and a beautiful creative experience!

And then I got sick.

Yep, really, really sick. I picked up some kind of nightmare gastro infection, which felled me like a chainsaw. On the night I finally dressed up in my fancy sequined gown, attended a reception at City Hall, and went to our first black tie event, THAT’S when I got nailed. I won’t reveal all the details. Suffice to say I had to flee the screening of a three-hour Turkish film, nearly had a Bridesmaids experience in an Uber driven by a guy named Pierre, but was saved by my Catholic fear of mortification and made it safely back to my hotel.

BUT, here’s the cool thing. I was so sick that the next night I had to go to the ER, and that’s when I experienced the not-so-glamorous side of Cannes, AND learned what a blessing it was to get a peek behind the curtain.

This experience reminded me how important and fruitful it can be for writers to flip the facade on a reader or viewer’s expectations.

What do you think of when you think of Cannes? Waves slapping the beach, stars dressed in designer ball gowns, cappuccinos, parties, champagne…

I experienced all of that. But here’s what I also saw.

Closing night of the film festival, behind the doors of L’hopital de Cannes. The gurneys, lined up and packed like sardines.  One young woman, horribly sunburned (and possibly impaired) sat with her hands on her thighs, eyes closed, tattered festival badge still dangling around her neck. The woman next to me, wearing a black satin ball gown, had fallen off her high heels and possibly broken her ankle. She spoke English, we got to talking and I found out she was Iranian, and a translator for one of the directors. We talked about the festival, her hometown and how the world didn’t see it as it truly was, and that she felt bad that her friend (parked in the waiting room in a similar ball gown) was missing a great party.

There was the German couple who had been there for hours. The husband hooked up to an IV (I wonder if he had a similar bug to mine?) and his wife constantly demanding that someone allow him to pee.

The nurses were clearly pissed off about something and gathered in tight knots to gossip in French. I couldn’t understand most of what they were saying, but it apparently involved another nurse who wasn’t doing her job (this via the Iranian translator.)

When I finally got moved to a room, the clock ticked over to 1 am. An old French man across the hall, with a huge Jacob Marley bandage on his head, kept watching me. Finally I waved. He waved back.

We sat staring at each other for a long time.

By the time my doctor came, I knew I had to get out of there. My stalwart companions, M and Y, were in the waiting room (they themselves had witnessed a knock-down-drag-out fight between a mother and her 20-year-old son,) and we needed to escape.

A nurse took my blood, we left, and in the dark quiet of a town that had just survived its biggest night of the year, we made our way back to where we were staying.

The whole experience revealed to me a side of Cannes that I hadn’t seen in all my weeks there. The people who live and work in the city, the action behind the glamour of a famous film festival, and my own little hero’s gastro journey in a town thrown into the spotlight for only two weeks out of the year.

So how does this apply to you?

TAKE ACTION! Look behind the curtain of the setting you are writing about. Is there a mask the place wears that you can slip behind? How can you provide a unique perspective on a setting or story or character that holds pre-conceived expectations? How can you give your reader/audience a glimpse of something surprising? How can you choose a unique point of view about a place or type of person or relationship that feels fresh and unique?

My not-so-glamorous experience of Cannes, actually deepened my connection to and understanding of this tiny city in the South of France. Where translators fall off their high heels, where young women get fried by the sun, where old men tumble and hit their heads and wave at strangers.

Where both the mask and the true face of a place collide.

As she was examining me, my young doctor asked, “Are you seeing stars?” I replied, “Yes, and I’m super dizzy.”

Excited, she said, “Which ones?”

Sign up here for my weekly writing tips and inspiration!