What the hell has happened to James Bond? Gone are the days when he’d kick Dr. No into boiling water with a gun in one hand and Pussy Galore in the other. He’s dark now. He has childhood trauma. And in the latest film, SKYFALL, he goes all Joseph Campbell. Even the villain, deliciously played by Javier Bardem, is trying to claw his way back into his “mother’s” womb.

I’m not the first to notice that James has changed. In screenwriting circles it was all the buzz a few years ago that they were “fleshing out” the character. And we saw evidence of it in CASINO ROYALE. Not only did we get one of our best Bonds (Daniel Craig) but we got a new character. A guy who actually fell in love. Who could sit in a shower, clothed, with a traumatized woman and comfort her. The world outside was the same—villains, chase sequences, gadgets—but Bond’s inner life had noticeably deepened. He was wounded, more fragile than he’d been. And I’d argue that it all started with 9/11.

I don’t claim to be a Bond expert, but even I know that though technically he’s British, Bond has always been a reflection of American culture and confidence.

Pre 9/11, we still had that cocky attitude about our place in the world. And it was reflected in the movies. Sean Connery, Pierce Brosnan, Roger Moore, there were no chinks in their Bonds. They were calm and cool and incredibly collected.

How far we’ve fallen. The Daniel Craig incarnation still looks ravishing (I’m still recovering from that glimpse of him in the powder blue bathing trunks in ROYALE), but this guy has issues. In SKYFALL he drinks too much, flunks the test to be an MI6 agent, and is too tired to even get it on with Moneypenny. He has two tasks—save the agents who have been compromised by the release of a top-secret list, and rescue M. He fails on both counts.

And yet, this new version of Bond has pulled me in. It may be a girl thing, but I’ve always hated the old James. He was kind of a cipher, and the movies were boring. Boat chase, shoot out, blah, blah, blah, car chase, girl in a bikini, blah, blah, blah… But this new guy is someone I can get into, root for. Yeah, he does basically tell Moneypenny she should just be a secretary, and he barely blinks when his “love interest” dies, but we can still hope. Maybe in the next film he’ll find a woman to love (WHO DOESN’T GET SHOT IN THE HEAD!) Maybe he’ll encourage a female agent to be good at her job. He already kicks ass on people who are actually threatening something important to him. And I wonder if all this will bring a whole new fan base to the franchise. Women.

It’s rare that we have the opportunity to analyze a single character over time, but Bond is the perfect litmus test for our country’s emotional temperature. We’ve definitely crossed some threshold when a homosexual attempted seduction of Bond becomes a set-piece for the villain, and when the climax can only be played out in Bond’s ancestral home, where he and the bad guy have the same “mother.” And she dies.

BAMBI, this is not. But there’s something primal here. This James Bond is crawling into the Hero’s Journey cave and facing his Ordeal.

Bond is no longer perfect. He’s just as fucked up, tired, and old as the rest of us. The way the SKYFALL script plays out, it’s as if the other Bonds never existed. Are we wiping the slate clean? Admitting we were never perfect and suave, that it was all just an act?

As a country, we’re definitely walking with a limp after the financial meltdown and recession and wars in the Middle East.

Is it possible that Bond is becoming human? 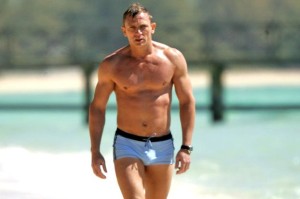