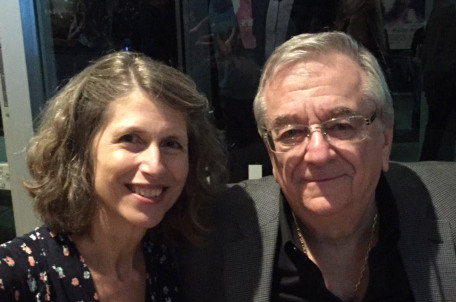 This is a quote from the Star Wars Databank…

“Yoda was a legendary Jedi Master and stronger than most in his connection with the Force. Small in size but wise and powerful, he trained Jedi for over 800 years, playing integral roles in the Clone Wars, the instruction of Luke Skywalker, and unlocking the path to immortality.”

My Yoda is named Howard Suber. He wrote the brilliant book The Power of Film, and has taught at UCLA’s film school for 50 years. He doesn’t wear a cloak, or have large hairy ears, or fight (well, maybe with his mind) but he totally changed my life twenty-five years ago when I took his story structure course.

When I first arrived at UCLA, I was terrified. I’d been a drama and communications major as an undergrad, but had never studied film before. I was certain I’d be out of my depth. That first year, all I heard was, “You have to take Suber’s class.”  “Have you taken Suber?”

It wasn’t easy to get in. In fact, I remember having to write a paper to get selected to even enroll. It was crazy! Who was this guy? And why was everyone obsessed with his course?

Every week, we would gather in a dark screening room, and he talked about the Greeks, and how dramatic structure works. He used specific examples, and asked us a million questions. His classes went on for FOUR HOURS. It was really the first time I had experienced a teacher who totally embraced the Socratic method. He also brought us mountains of handouts. I remember him staggering into class one day, saying, “I was up until two in the morning, just writing down some notes I thought you might be interested in.”

And seriously, on every one of those FORTY pages, gems.

Each week we took a vote and picked a recently released movie, still out in theaters, and wrote a paper on it. When asked about how we should focus our papers, he said, “Any aspect of structure will do.” After my immediate panic, I experienced my first real taste of intellectual freedom.

Because you are all writers, I wanted to share with you just a few of the things I learned from Howard.

There’s an engine under the hood.  Stories work because they are constructed. They have beginnings, middles and ends, and tiny parts that make them go fast or break down. After seeing the pattern that Howard identified for us, I never looked at film the same way again.

Your brain is only using a small percentage of its capability.  His class was the first time I’d ever truly been asked to think. To go deep. To come up with my own ideas and analyze films without cribbing from other theories. Most weeks, after his class, my brain was so squeezed, I just crawled into bed.

Find your midpoint!  What a revelation. In the middle of most feature films (usually around 60 minutes in) something big happens that turns the story in a new direction. One of my favorite memories is of sitting in a darkened theater, watching something HUGE happen on the screen and hearing Howard’s disembodied voice whispering into a microphone, “59 minutes and 27 seconds.”

You can never know everything.  As a writer, you must always be a student. Listening, modifying, growing.

Classic films are not just “popular,” they are also “memorable.”  And for certain specific reasons (which he spells out in The Power of Film.)

Heroes can be quiet.

Most movies can be summed up by one word– “Trapped.”

When dealing with character motivation, there’s a difference between “Fate” and “Manifest Destiny.”

As a writer or filmmaker, you must be a hero in the story of your own career.  When you’re knocked down, you have to get up. You have to MAKE your dream happen and face dragons to get it. He came up with what he calls the “Goya” theory. It’s very intellectual. Get Off Your Ass.

Even though I was in the directing program at UCLA and Howard was a Critical Studies Professor at the time, I asked him to be my thesis film advisor. The care he took and the advice he gave me when I was at my low point, lifted my project (and me) in many ways.

This past Friday night, he was honored for his 50 years of teaching at UCLA, and the theater at Melnitz Hall was filled to capacity with his colleagues and former students (including me, with him, above.)

The reason Howard is a Jedi Master is because he is fully aligned with THE FORCE.  His own unique ability to train, connect with, and inspire.

Howard’s class defies the ‘lessons’ of popular filmmaking. Because in his classroom, every day, intuition and insight are born.

Take Action!  Do yourself a favor and buy his book The Power of Film.  It’ll rock your planet.

Sign up here for my free weekly writing tips and inspiration!