A Masterclass in Point of View and Flashbacks 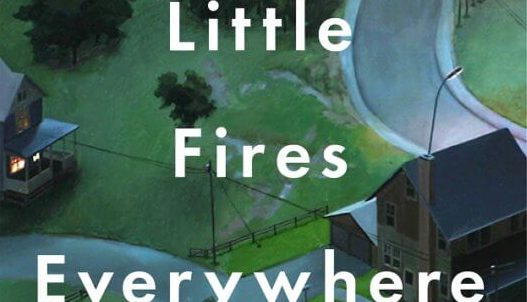 Celest Ng’s latest novel Little Fires Everywhere, starts with a house burning down in the perfect community of Shaker Heights Ohio. Who set the fire becomes the dramatic question that drives the narrative, and even though we “know” who did it, how we get there is some kind of complicated miracle.

The basic set up of the book is this: Everything in Bill and Elena Richardson’s house is perfect. Three of their four children, Trip, Lexie, and Moody, fit some kind of proud parent checklist.  Trip is a star athlete, Lexie’s going to Yale, and Moody is sensitive and tender. Even Izzy, the rebel, in her Doc Martens, acts out in a way that’s predictable for her age. But when artist Mia, and her daughter Pearl show up and rent the Richardson’s income property, the family’s perfect facade starts to unravel.

I wanted to write about this book not because it’s perfect (it’s not,) but because it’s a masterclass in using an omniscient point of view, and flashbacks.

Mrs. Richardson filed this piece of information away in her brain. “You’ll have to go back someday,” she said. “I believe in knowing where your roots lie… (we stay in her perspective awhile here, then)… She turned back to Pearl. “Where did  your mother grow up?”

Pearl fidgeted. “I’m not really sure. California, maybe?” She poked her omelet, now gone rubbery. “She doesn’t talk about it much. I don’t think she has any family left anymore.” In truth, Pearl had never had the courage to ask Mia directly about her origins, and Mia had deflected her roundabout questions with ease.”We’re nomads,” she would say to Pearl. “Modern day gypsies, that’s us. Never set foot in the same place twice.”

See how easily we drift from Mrs. R. to Pearl’s inner thoughts? The question “Where did your mother grow up?” becomes like a narrative football, and once passed to Pearl, allows us to go inside her head.

While most of the book takes place in the 1990’s era of Bill Clinton, we flash back to the past in a way that feels organic and moves the story in the present day forward.

Mrs. R. seeks out Mia’s parents and finds out something shocking about her past. We finish this chapter in Mrs. R’s perspective as she reacts to the news. Then, we start the next chapter with a flashback to this shocking thing we’ve just found out about. A flashback that lasts for 2 whole chapters (50 pages!) After the second flash back chapter,  we bounce back to the present with the help of our omniscient narrator. “Mrs. Richardson, of course, could not now know all of this. She could know only the basics of the story the Wrights had told her.”

See how Ng creates transitions from character to character within a scene, and guides us forward and backward through time?

If you are attempting the use of a complex omniscient POV or flashbacks in your novel, read this book. While the way the themes and character arcs were paid off at the end were, in my opinion, a bit overwrought, the way Ng got us there was a marvel.

If you’re writing a film, think about how you could use some of these strategies in a visual way to  reveal your story through multiple characters and intersecting time zones. Do we cut between two or three character threads, and build to a climax where they all meet? Could you use a film version of a chapter break to go to a flashback and then back again?

TAKE ACTION! Check out Little Fires Everywhere. See how multiple points of view are handled under an omniscient umbrella, and how flashbacks are made to feel organic and part of the story happening NOW.

Sign up here for my free weekly writing tips and inspiration!